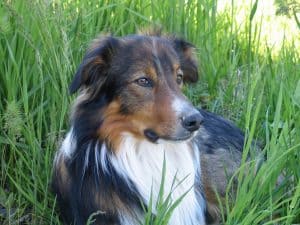 Dex was born at Egertsen’s Cedar Creek English Shepherds in Iowa. Peg Egertsen did an outstanding job pairing us up with Dexter. And she has been an invaluable mentor to us ever since. I like Peg’s philosophy of dog training and she’s a wealth of information when it comes to breed history.

Dex was a calm, gentle dog that was very easy to live with. He truly had an “off switch”. Even as a young puppy he would happily lie at my feet while I worked at the computer.

Dex was polite and extremely biddable, and also an “informer.” He let me know when something was wrong. Do you recall how TV Lassie would tell her owner “Timmy’s fallen down the well”? Dex was like that. He will let me know if an animal was someplace it shouldn’t be or doing something naughty.

He had a low-key herding drive around the poultry and a keen instinct to nurture animals. This made him an ideal dog to have around birds and other small livestock. That said, he was fearless when asked to move cattle out of an area they were not meant to be. He herded in very upright, loose-eyed manner.

When given a job such as, “Get the chickens out of the garden”, he preferred to figure it out by himself rather than receive a lot of instruction from me. And he often did it differently than I expected!

He was a fiendish hunter of voles and gophers and a loud and protective watchdog, wary of strangers until he got to know them. I really appreciate this trait especially when working in remote parts of the ranch.

Dex was the quintessential “English shadow” staying close to my side throughout the day. In the old days, he would have been the kind of dog that followed the kids to school. I rarely had to call him to me. He was always in tune to me.

A dark shaded-sable (not a tri-color), MDR1 normal/normal, UKC registered.  Dex was raised on a modified raw food diet and with minimal vaccines.

We have kept his son, Rudy. (Scroll down to read about Rudy.)

Hips: Read how natural rearing and lifestyle reduce hip dysplasia. Below is a video of Dexter at age 8, keeping up with Clara, age 2. 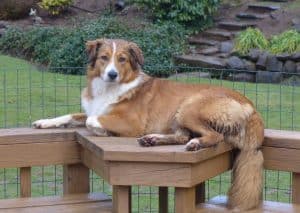 Clara was born 11/03/14 in Michigan at Debbie Heidtman’s. The Heidtmans have been breeding English Shepherds for a very long time, keeping alive some of the old lines. Clara’s pedigree carries some of Mildred Schoeman’s lines (sometimes spelled Shoeman). These lines were nearly lost, so we are happy to see this in Clara’s pedigree. You can read more about Mrs. Schoeman’s dogs in the section about our breeding goals.

The best way to describe Clara is sweet and affectionate. She is absolutely crazy about people. All people— strangers, family, children, men, everybody. Debbie Heidtman described Clara’s mother as “the sweetest dog” and our Clara is just the same.

Clara’s a bit more “herdy” than Dexter. Like him, she herds in an upright manner but with a little stronger eye. She balances off the animals more intuitively. She drops to the ground if the birds get spooked and flap about. She also drops when, for example, I tell her to wait while I turn off an electric fence. I didn’t teach her this. It’s just something she does. 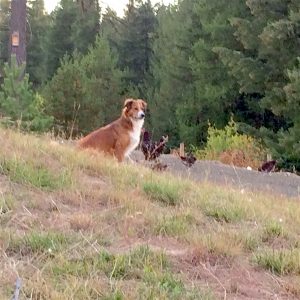 Clara’s a busy dog, hunting vermin and checking out things around the ranch. She will occasionally herd the free-range poultry around the yard when she’s bored, but she is entirely trustworthy with them. She can often be seen sitting on a hill up above the young chicks, watching over them. This obviously deters predators quite a bit.

Clara has always been a brave dog, even as a tiny puppy. I thought she might grow up with an independent streak based on that, but she is very biddable and keeps tabs on me through the day, although she is less of the “English Shadow” than Dexter. 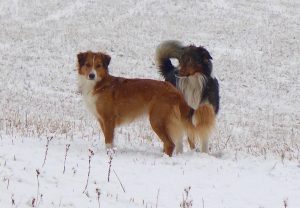 Clara is also a shaded-sable. MDR1 normal/normal. CEA clear, UKC registered. She has been raised on a modified raw food diet and with minimal vaccines. Her health is excellent.

Rudy was born 8/23/17, son of our Clara and Dexter. He made it clear as a very young pup that he wanted to stay here on the ranch and carry on Dexter’s legacy.

Rudy is maturing into a lovely, handsome dog, although he’s still a bit of a puppy in his head. He is an interesting blend of his parents’ characteristics.

Like his mother, Rudy is very chatty, affectionate, and not bothered by loud noises.

Like his father, Rudy is a nurturer of our free-range poultry. When he hears an uproar, he runs to check out things.

Also like Dexter, Rudy is suspicious of strangers until he gets to know them. And he is the typical “English Shadow” always at my side. He is a very polite dog. This makes him very easy to live with. 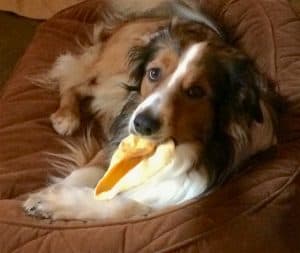 Rudy’s herding drive is a blend of Clara’s higher drive and Dexter’s calm drive. He is interested in moving the geese but he does not chase the birds.

Rudy is a fast learner.  He is an avid vermin hunter and watch dog.  I’ve also  noticed him tracking when we’re out in the fields or woods. Of course, all the dogs follow game trails and tracks, but I notice him more than the others. One of these days I mean to put a tracking harness on him and do formal training. It’s a neat skill to have in a dog’s repertoire, especially if a child or elderly person wanders off or even if you just lose your glove in the field!